I used to hate trackpads, and with my first portable Mac, and iBook G4, I usually carried a USB mouse with me and used that instead of the built-in trackpad.

But Apple’s switch to multitouch trackpads makes them so much more functional that when I got a MacBook Pro a few years back, I finally ditched the mouse.

When the time came to upgrade my family’s Mac, I decided to replace the mouse with an Apple Magic Trackpad. It works very well, and my only complaint is that it’s only available in a battery-powered Bluetooth version. I know Apple seems to love cordless keyboards, mice, and trackpads, and of course I like them too. But I hate the dependence on batteries. I’d rather have a corded USB trackpad, if only Apple would sell me one.

Fortunately, my problem has been solved by mobee technology Power Bar. It’s a cylindrical battery pack with a built-in USB powered charger that fits into the battery compartment of the Magic Trackpad. It looks like this:

Installation couldn’t be easier. You simply unscrew the Magic Trackpad batter cover (which you will no longer need) remove the existing batteries, and pop in the Power Bar. It’s threaded at one end so it screws in just like the original battery cover. There’s a micro-USB port on the end. You use the included USB cable to plug it in, and let it charge.

In theory you can unplug it when you’re using it, but I just leave mine plugged in all the time. The picture below shows how it looks at the business end. (Note that the green LED lights up when it’s plugged in to show that it’s charging.) 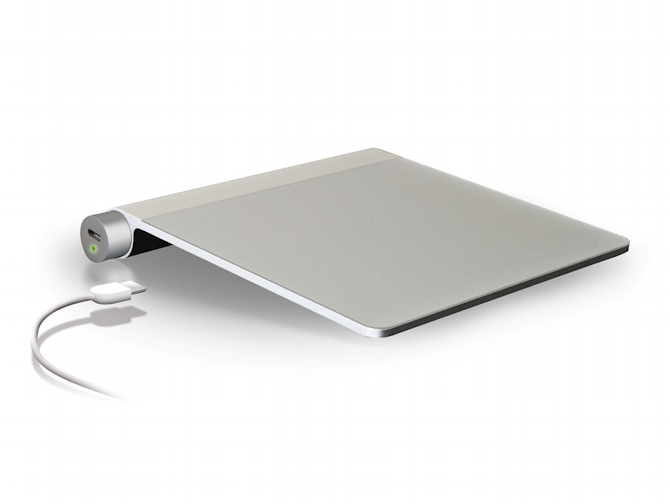 The mobee Power Bar is available for $32 (with free shipping) from Amazon.

For many years now Macs have offered what Apple calls a Firmware Password. This special kind of password needs to be entered before you boot the machine, offering an extra layer of security. This password prevents a hacker from simply booting your Mac using an external drive or optical disc to gain access to the files on your internal drive.

Occasionally a client had a Mac with an unknown firmware password, and couldn’t boot it. (This might happen if the password was set by an employee who no longer worked there.)

Fortunately, this was easy. It wasn’t well known, but simply changing the amount of RAM would remove the firmware password. So I’d open the Mac, remove a memory card, and reboot. The firmware password would then be removed. Then I simply replaced the memory and my client would once again be able to use his or her Mac.

Starting last year Apple switched to a much more secure system for firmware passwords. The new system provides no method for independent techs like myself to remove it. These days, if you need a firmware password removed, you must take it to an Apple store or authorized service facility. Resetting it requires retrieving a special code from your Mac, feeding that code into a special app that app generates an unlock code. The code is unique to each Mac, and Apple has kept a very tight grip on the app that generates the unlock code.

I don’t generally recommend using a Firmware password. If you need your data to be secure, your best bet is to turn on FileVault, the Mac’s built-in encryption feature.

For more details about how the new firmware password system works, I recommend Topher Kessler’s CNET article on the subject.

Certain iMacs sold between October 2009 and July 2011 may have defective hard drives.

All the affected drives are 1 TB models. Apple is replacing them for free. You need not be experiencing any problems to qualify.

Don’t take chances with your data. If yours is one of the affected models, back up your drive right away, and have it replaced.

For more details, and to see if your iMac is one of the affected models, click here.

You’ll see a list of items set to automatically open whenever you login. Beneath that list are plus and minus buttons that let you add or remove items from that list.

If you’re having a problem with something automatically opening every time you login, chances are excellent that it’s in that list.

Still, there are some apps that automatically open even though they’re not in your Login Items list. If you run into one of these apps, and want to stop it from auto-launching, the first thing to do is to check that app’s preferences. There’s probably a checkbox to turn automatic launching on or off.

If you can’t find a preference setting, there are  five other places to look:

In theory, there’s a fourth place: /System/Library/LaunchDaemons. But that folder is reserved for parts of the OS X operating system, and you shouldn’t find any 3rd-party apps in that folder.